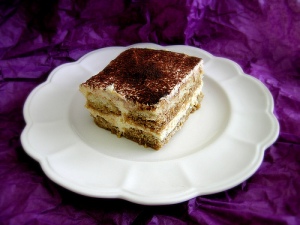 This recipe comes to us courtesy of Sophia Knowles.  Thanks, Sophia!

If you think of Italian desserts, then for many, the first that springs to mind is Tiramisu. This most iconic of Italian dishes is said to have been created in the 70s at the Le Beccherie Trattoria in Treviso, northern Italy.

Sadly the restaurant, which opened in 1939 and had a proud 70 year history, finally closed its doors in April 2014 due to the ongoing economic difficulties in the area. A lack of customers and a change in Italian eating habits, seeking out cheaper eating options, led to the current owner, Carlo Campeol, taking the sad decision to shut up shop.

The making of Tiramisu

The classic Italian dessert was created by Carlo’s mother, after the birth of her son in the seventies. She is quoted as saying that she needed something to give her a little extra energy, hence the Tiramisu, meaning “Pick me up” came into existence.

Campaigns have been running to see the Italian dessert given special European recognition, which would state that like pizza coming from Naples, the true Tiramisu is made in Treviso. This protected status would secure the desserts place locally against the worldwide imitations and copies, although it is a shame that its place of origin will no longer open its doors.

Tiramisu is a semifreddo dessert, served chilled and not frozen. Tiramisu contains –

Brew an espresso coffee with two teaspoons of sugar and let cool.

Prepare the Zabaglione filling by beating the yolks in a glass bowl over a double boiler until fluffy and add the sugar and the wine. Transfer into a pan and over boiling water mix until it thickens.

Mix the mascarpone until it is smooth and add the rest of the prepared zabaglione, mix well and then add the whipping cream. .

Assemble the Tiramisu by dipping the ladyfingers in the cooled coffee and build up a layer on the base of a tray. Spread some of the Zabaglione mix on top of the biscuit layer and then repeat the process, once you have put the remaining creamy mix on the dessert, lightly dust it with cocoa powder and leave to chill in the fridge for 3 – 4 hours and serve.