Wartburg Castle, located in central Germany, is an amazing sight to see.  Originally built in the eleventh century, Wartburg Castle was in a near constant state of active inhabitation and renovation until the early twentieth century.  Wow!  The most famous inhabitant of Wartburg Castle wasn’t a count or a prince, but rather a sixteenth century monk seeking refuge under an assumed name.  In a tucked away room in Wartburg Castle, Martin Luther produced the first hand-written translation of the Bible from Latin into German.  Even five hundred years later, Luther pilgrims continue to flock to the castle.

What does this story have to do with the watermelon cooler pictured above, you ask?  Well, consider that Wartburg Castle is perched on a cliff 1,350 feet above the town of Eisenach.  Here is a view from the top: 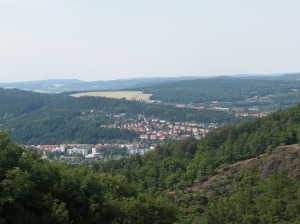 To preserve both the ecology of the cliff and the historic integrity of the castle, visitors are not permitted to drive to the castle.  The hike to the top is steep – I mean STEEP – and I happened to visit on a rather toasty summer day.  Exploring the castle exterior (free of charge) was very worth the hike, as you can see from the photos, below: 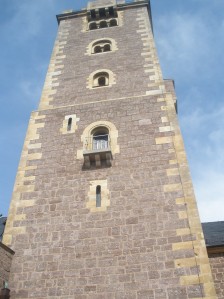 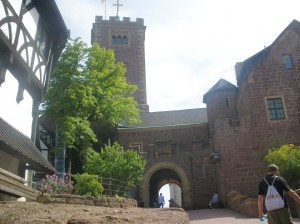 It was a lovely afternoon, but after trekking back down from the castle, I felt a bit as if I had fallen into a moat full of syrup.  Not a refreshing feeling!  Germany, as we’ve discussed in earlier posts, is a nation committed to energy conservation (much more so than the US, in any event).  Air conditioning at the foot of the cliff was in short supply.  Watermelons and mineral water, however, were readily available… the combination is far more delicious and an all-around better idea than a blast of toxic Freon.  😉

Feeling toasty?  Simply cut a few small chunks of watermelon and freeze solid.  Plunk them in pairs into tall glasses of sparkling mineral water, relax, and enjoy.  You might feel refreshed enough to climb up to your nearest neighborhood castle!